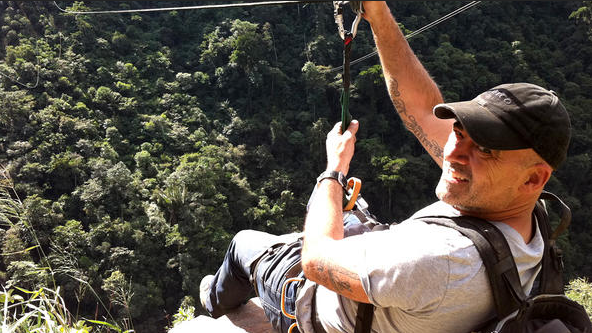 We are proud to announce Todd Carmichael will host a new TV show on Travel Channel, Dangerous Grounds, premiering Monday, November 5 at 10:00 p.m. following Anthony Bourdain’s No Reservations Series Finale. Check out sneak peek pictures from the show on Travel Channel’s website on this link. Below is the press release:

CHEVY CHASE, MD (August 21, 2012) How far would you go to get a good cup of coffee? In Travel Channel’s new original series, Dangerous Grounds, premiering on Monday, November 5 at 10:00 p.m., ET/PT (moves to regular time slot on Tuesday, November 13 at 9:00 p.m., ET/PT), coffee magnate and adventurer Todd Carmichael traverses the globe, zip-lines on a makeshift cable thousands of feet in the air, and dodges machine gun-toting adversaries all on the hunt for rare strains of coffee beans in some of the most fascinating and unseen places in the world. Why? With nearly a billion people drinking coffee every day, coffee has become the second most-traded commodity behind oil, and most importantly to Carmichael, his livelihood depends on the success of finding the perfect hidden coffee bean!

Over the course of eight one-hour episodes, viewers will follow Carmichael as he travels to remote locales including Haiti, Bolivia, Madagascar and Borneo while showcasing sites and cultures that few have even seen, let alone visited. These are places where things can get out of control at the blink of an eye. Whether sleeping under his truck to avoid being detected by dangerous robbers or using makeshift repairs to fix a broken engine, Carmichael risks it all in search of the ultimate coffee beans. Travel is his life, and coffee fuels his passion for adventure.

Coffee plays such a significant role in our culture, both in the U.S. and abroad; however, few know precisely where their morning cup comes from and how it’s sourced,” said Andy Singer, General Manager, Travel Channel. “Dangerous Grounds takes viewers on an authentic, gripping journey as expert Todd Carmichael, one of this generation’s true explorers, scours through some of the most remote, and often dangerous locations, in order to find the ultimate bean for an exceptional cup of coffee.

In 2008, Carmichael — a real-life Indiana Jones — set the still-standing world-record for the fastest unsupported trek to the South Pole: thirty-nine days, seven hours and forty-nine minutes. In addition to being an avid adventurer, he is also a successful businessman. His premium coffee company, La Colombe Torrefaction, is based in Philadelphia and supplies top coffee roasts to the best restaurants and gourmet outlets in America. Since Carmichael focuses on the rarest coffee beans, his exclusive blends are sought after by many of the world’s top chefs. Growing up on a farm in Washington, Carmichael can relate to the famers he buys from throughout the world. Because of this, he bypasses the distributor that typically takes advantage of the farmers, and pays a fair price directly to the source.

Carmichael is also an active humanitarian. His expedition to the South Pole raised a great deal of money for Orangutan Foundation International and he worked with the Clinton Global Initiative to raise considerable funds and awareness toward a coffee university in Haiti. He also developed a coffee blend with Leonardo DiCaprio, Lyon, of which 100 percent of the profits go to the Leonardo DiCaprio Foundation, funding wildlife protection, forest preservation, clean-water projects, disaster relief and climate-change research around the globe.

In the one-hour premiere episode of Dangerous Grounds Carmichael travels to a poverty-stricken Haiti still devastated by the aftermath of the 2010 earthquake. The country, despairing and dangerous, is home to what was once one of the most savored coffees in the world. After averting a brewing riot in the marketplace, Carmichael travels deep into the mountains where he navigates treacherous roads, dodges dangerous armed middlemen and finds an ancient bean hidden in the deepest area of the elevated terrain.